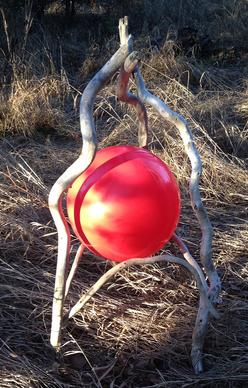 I remain fascinated by finding ways to assemble driftwood that has been shaped by natural forces into designs that are absent or rare in the natural world. As I write this, my current work-in-progress features a sphere that will measure 16" in diameter, crafted using as a positive mold a red rubber bouncy-ball that I rescued from a snowy highway median where it had blown out of the back of a pickup truck. Call it "urban beachcombing"!

(Note that the ball in the photos comprises only the mold; it will not be present in the finished piece.) 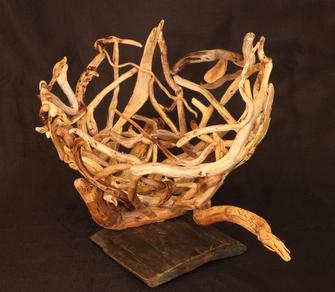 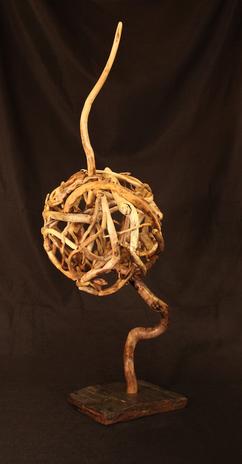 Next, I wanted to try a sphere using a negative mold, where the globe is essentially formed from the outside in. This creates an outer surface that is almost perfectly smooth, the way a round beach rock is polished and rounded by the force of ocean waves that roll it up and down the beach. I selected a rigid Plexiglass mold scavenged from an old store security camera dome, measuring 12 inches in diameter.

As with my first molded sculpture, "Driftwood, Cubed", I had to find a way to mount the globe since I didn't want it just rolling around loose. I found a beautiful, smooth, twisted driftwood stick whose shape to me suggested a sprouting plant or vine, and mounted this to a piece of gray Alaska beach slate. The result is the sculpture called "Globe (Impaled)".

My first creation using the positive mold method, where the driftwood is arranged on the outside of the spherical object, is the piece called "Fire Bowl". I used a 16-inch-diameter plastic fishing buoy (also scavenged from an Alaskan beach!) and crafted the bowl upside-down on the mold. The name of the piece is suggested by the driftwood "flames" that appear to lick up from the rim. As a base I used a piece of graywacke (a form of slate rock) picked up from a beach in Eaglek Bay, on the northern coast of Prince William Sound. 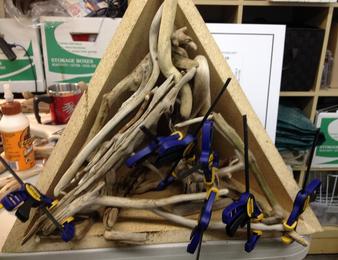 After finishing "Driftwood, Cubed" I was anxious to experiment with other geometric forms, particularly those without 90-degree angles. I came up with the concept for a small table-top pyramid, and built a mold for a 3-sided pyramid measuring exactly 16 inches on each side. Crafting this piece was much more difficult than the cube, in part because I was working inside a much smaller space; I liken it to building a model ship inside a glass bottle, using only forceps and an eye-dropper! The result is the piece I named "Pyramid Power". 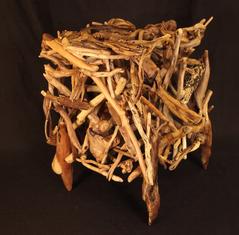 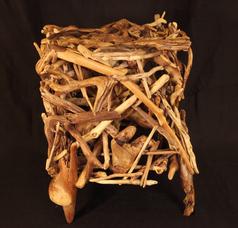 With the completion of "Driftwood, Cubed" and "Pyramid Power", I felt ready to tackle circular and spherical forms. I knew these would be much more difficult, for at least two reasons. First, most driftwood sticks are relatively straight, or have a slight curve or an irregular twisted shape. Finding pieces with a smoothly-radius bend is very challenging, even on beaches with heavy driftwood deposits like those in Prince William Sound. Second, I had to decide whether to employ the positive or negative mold method, and whether to create a bowl-shaped piece, or a sphere.

In the end, I have used both methods and have since employed as a mold shapes that include a dome-shaped plexiglass camera cover, a silicone mixing bowl, a child's rubber bouncy-ball, and a hard plastic fisherman's buoy. 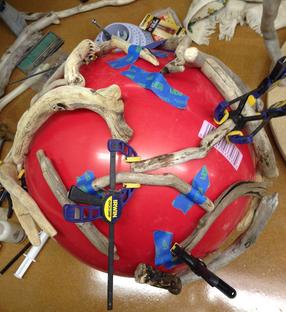 English driftwood artist and crafter Karen Miller makes beautiful pieces of functional driftwood furniture such as dining tables, lamps, and mirror frames. Some of her work, including a driftwood sphere floor lamp and heart-shaped driftwood sculptures, probably employ a reverse mold technique, where the driftwood is laid inside a shaped mold, creating a driftwood sculpture with a finished shape that is smooth and uniform-looking. This is comparable to the indirect or "stone" technique of mosaic-making.

Some of my pieces are done entirely with a mold, and others employ a form to shape just a portion of the work, but I then remove the mold and finish the piece using a free-hand technique. I am fascinated with the artistic technique of taking a material as uniquely-shaped and non-linear as Alaska driftwood, and arranging it in a way that seems to compress and align the pieces into perfect geometric shapes like squares, pyramids, and spheres.

I'm not the first driftwood artist to employ this technique. Australian environmental artist John Dahlsen has created marvelous driftwood collages he calls "assemblages" where the pieces of wood are attached to a flat backing surface. This technique compares to the direct approach of mosaic-making, although unlike traditional tessarae mosaic-making, no grout or adhesive is visible in Dahlsen's finished pieces. 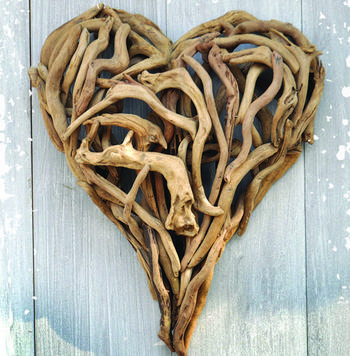 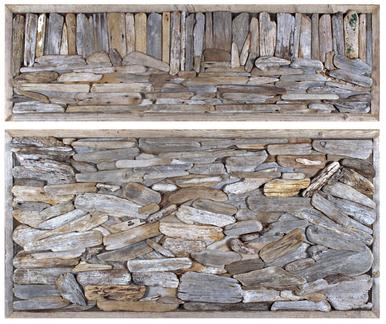 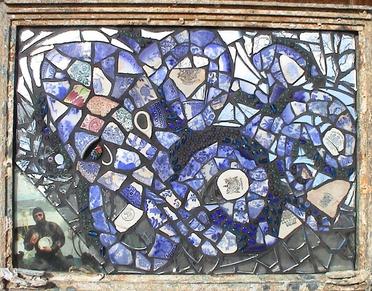 In the indirect method of mosaic-making, the tesserae are placed upside-down on either a flat surface such as a board or bed of sand, or arranged inside a mold of the desired shape. Once the tesserae is in place, a layer of adhesive grout is applied to the back side of the piece. Once this dries, the mosaic is removed from the mold, turned face-up, and a final finishing layer of grout applied between the tesserae pieces to fill gaps between the material and create a visually smooth look to the mosaic. Because the mold aligns the outside or finished surface of the mosaic along a smooth plane, any thickness irregularities arising from the use of different tesserae material is hidden.

This is an indirect-method mosaic I created years ago using glass beads, broken china plates, and wave-polished beach glass.

There are two basic methods of creating a mosaic. In the direct method, the individual mosaic pieces are laid or glued to a flat surface or mold face-up, with the adhesive attached to the back of each piece, and the finished surface facing the artist. After all the tesserae have been placed, a layer of grout is worked into the gaps between each piece, and the excess grout is wiped off to create a smooth, uniform surface.

The direct method works well for mosaics constructed of tile or other tesserae of a fairly uniform thickness, but for mosaics comprised of materials that are different thicknesses (such as broken glass, pottery shards, or wood) the visible surface of the mosaic is too rough for the grout to evenly fill the gaps. If the mosaic is a floor piece that will receive foot traffic, it is particularly important that the tesserae are smooth so they do not create a tripping hazard, or become broken. To solve this problem, the indirect or "stone" method is often used. 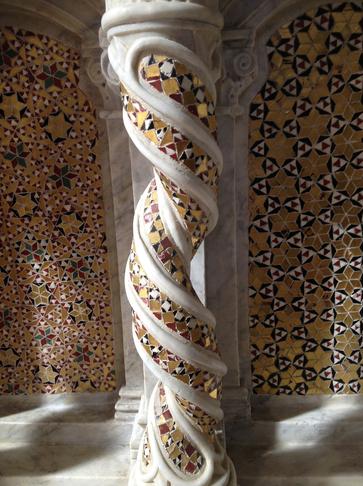 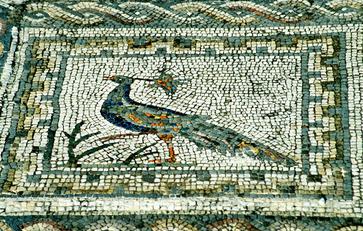 Traditionally, a mosaic is an assemblage of tile, rock, pottery shards, glass, etc. that are affixed to a backing surface such as wood or stone. The backing can be flat, such as a wooden panel or stucco wall, or it can be shaped, such as a rounded vase or a human or other form. The small pieces that comprise the visible part of a mosaic are called tesserae, a term that in ancient Greece and Rome was used to describe small blocks of wood or bone used as tokens. The Greeks and Romans were prolific mosaic-makers, developing artistic techniques that are still used by artists today.

I have adapted some traditional mosaic-making techniques to my work as a driftwood artist, and about half of my pieces are made using either a positive or negative mold to create the dominant shape. I have coined the phrase Molded Driftwood Sculpture to describe pieces that I create with one of the mosaic approaches described below.

My first Molded Driftwood Sculpture is the piece called "Driftwood, Cubed" which was created using the reverse mold method, inside a wooden cube measuring exactly 16 inches per side. My inspiration was the image of old automobiles that had been crushed into an unrecognizable cube for recycling. What would it look like if a giant pile of driftwood could somehow be compressed into a uniform block? (Without breaking the wood, of course). I wanted the cube to appear as if it was a solid block, not just a hollow shell with driftwood only along the outside plane of the cube. I had to consider how the finished sculpture would be displayed: Should it just sit on one of its six sides? Could it somehow be balanced on one corner? Ultimately I decided to build driftwood legs into the piece, tying these into the finished sculpture in a way that supports the piece sturdily on the floor or on a table. 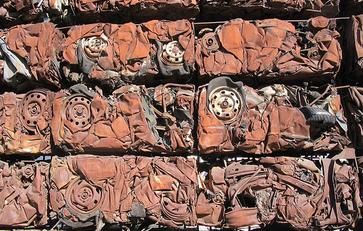 Please ClicK Here to return to the Main Gallery

Please  CONTACT ME to discuss your ideas and inspirations. 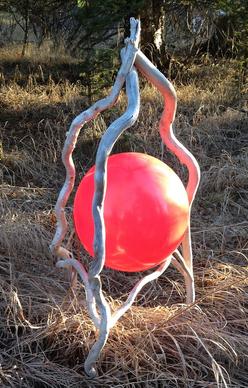 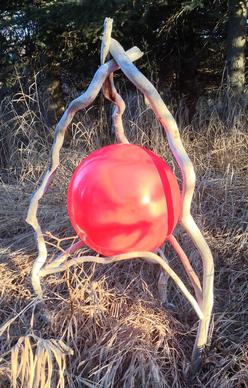